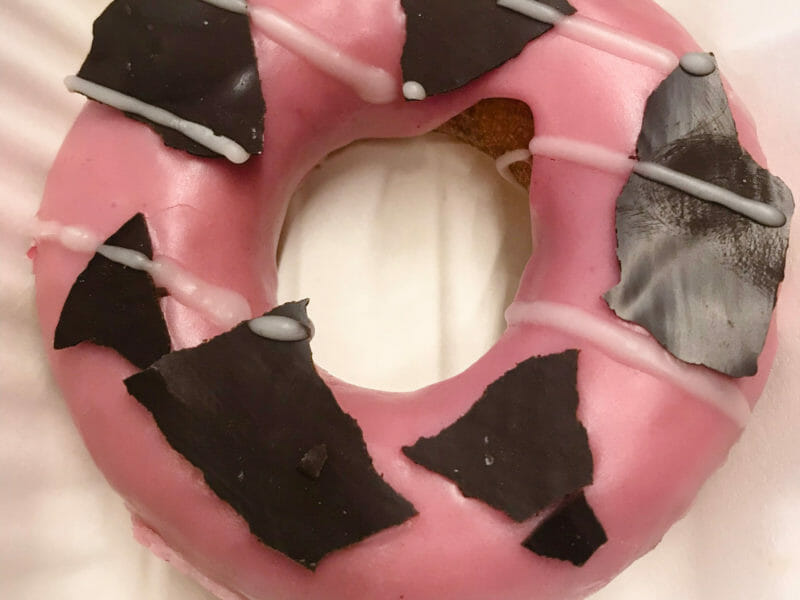 Is it best doughnuts or best donuts? Who cares if they are good! We thought it would be fun to put together a list of the best doughnuts that we have found during our travels or at home. Please note that these are in no particular order. Probably just the order that I found the pics in my phone.

Portland has no shortage of great doughnut shops, but our favorite is Blue Start Donuts. They started making their gourmet, brioche dough donuts back in 2012. Now, they have 8 locations in Portland and a few in Southern California. Their donuts are delicious but Chocolate Almond Ganache is extra special.

I know what you’re thinking, What does Cartems mean? It doesn’t really mean anything, but it should mean great donuts. Their ingredients are fresh, and donuts are never ever frozen. They source ingredients as close to home as possible, and organic wherever they can. They offer cake and yeast donuts and have several vegan gluten friendly options too! Check out one of their 3 locations if in town.

While in Chicago, you must check out Doughnut Vault. They serve artisanal hand-crafted doughnuts in classic flavors, made in small batches to preserve quality. They do have their regulars, but also have a daily special. Click here to see what they are offering today! With 2 locations in Chicago, there’s no reason not to go!

Calgary’s Hoopla Donuts is the brainchild of Phil & Sebastian, known for their great coffee. All of their 3 locations are downtown and only open on weekdays. Their flavors are on the creative side and they have plenty of gluten-free and vegan options.

On their website, Yonni’s Doughnuts has the best quote, “coffee + doughnuts = best friends forever”. No truer words have been spoken… You’ll find their doughnuts in Discovery Coffee cafe locations in and around Victoria, BC.

We discovered this gem during a visit to Nashville. Five Daughters Bakery is best know for their 100 Layer Doughnut (their version of a cronut), but also offer other sweets. Their products have no chemical preservatives, chemical preservatives, genetically modified organisms, hydrogenated oils, soy, artificial colors or flavors. Their treats are made daily from scratch, sourcing locally and fresh. It’s a good thing for my waistline that I need to travel for these tasty treats because I would have them regularly if I lived close by. They have 3 locations in Nashville, 1 in Atlanta, and 2 in Florida.

Lucky’s Donuts is a sub-brand of 49th Parallel Coffee Roasters. It makes sense since nothing pair better with a delicious donut better than a cup of coffee. Authentic, hand-crafted and genuinely delicious, Lucky’s Doughnuts are made fresh throughout the day using the highest quality natural ingredients. If you are a fan of peanut butter and chocolate, you’re in luck. They have the best PB Chocolate Old Fashioned! They currently have 3 locations in Vancouver.

Founded back in 2003, Voodoo Doughnuts is the OG of the “craft” doughnut. With over 50 varieties, has something for everyone! If you are planning to go, you might want to take a look at their doughnut list before going. It’s pretty overwhelming trying to decide quickly which ones you want.

Now, you can get their tasty treats in various US cities. They have locations in Portland Oregon, Eugene Oregon, Denver Colorado, Austin Texas, and now L.A. California.

Not only are Holey Grail donuts some of the prettiest that I have ever seen, they are only available in one of the most magical places on Earth. They operate on Sundays in a small food truck in Hanalei on the island of Kauai. This is the original taro donut and is also vegan friendly. If you don’t know what taro is, it’s a root vegetable. It’s an acquired taste. But, don’t worry, you can’t taste it.

As Calgary‘s first gourmet doughnut bakery café, their vision was to create the best doughnut any one in Canada had ever tasted. Their doughnuts are preservative free with local and organic ingredients whenever possible. The availability of their doughnuts varies daily. Since they are in Calgary, we’ve had to chance to visit quite a few times through the year. In case you are wondering, my 3 favorites are: lemon curd, peanut butter cup and coconut. Currently, they have 3 locations in Calgary and have 1 location in Toronto.

While planning our stay in Maine, we came across Holy Donut in Portland that makes donuts with potatoes. Well, we had to try some out. The donuts are made by folding in riced white russet potatoes, Maine’s #1 crop, into standard cake donut dough. Don’t worry, they are delicious, and you can’t taste the potatoes. They have 3 locations and quite a few varieties. We bought 6 to be able to taste a variety. My favorite one was the Dark Chocolate Toasted Coconut and Coconut Milk Glaze. Be warned, they typically sell out so, for the best selection go before noon. We went at about 9 am and we stood in line for about 15 minutes.

The Beechwood Doughnuts shop is a little gem in the heart of St. Catherines, Ontario. Their doughnuts are all vegan and very tasty. If you are planning to stop by, do so really early in the day because they tend to sell out. Thinking we were being cleaver, we planned to be there a few minutes before opening and were greeted with a lineup. We were able to get served within a few minutes. It wasn’t really a problem since it took us that long to decide which flavors to get.

Prior to heading to Denver, we did a bit of research on where we should go for a doughnut. Habit Doughnut kept showing up, so that’s where we went. One interesting thing is that you can add an injection of alcohol or of CBD to your doughnut.

Finally, if you have any doughnut or donut shop that we should visit, comment below! We are always more than willing to eat a doughnut or two.

This post may contain affiliate links, which means that we may receive a small commission, at no cost to you, if you make a purchase through a link.

Our Most Popular Posts

Kalalau Trail – Everything you need to know

A day in St. Andrews

We are a Canadian couple that loves to travel… a lot! After years of experiencing the good, bad and ugly of travel we have become wary when going to new destinations. We are sharing our experiences with you so you can enjoy yours.

All establishments, activities and products featured on warytravelers.com are approved by the owners of this site.  Most content is not sponsored but at times, some content may be sponsored and will be disclosed.  All opinions expressed are unbiased and our own.  We share this information with you in hopes of contributing to making your vacation memorable.

We participate in the Amazon Services LLC Associates Program, an affiliate advertising program designed to provide a means for us to earn fees by linking to Amazon.com and affiliated sites.